If you were at OOW last week and saw the following tweet from me, you probably thought I was not a happy camper.  And you would be spot on correct.  But it also made me think that before I do my “How Exactly Does Essbase Work? Part II” I need to do a “How Exactly Does Essbase Work? Part 0”.  I like that there are some traditional Oracle people who want to learn more about the Hyperion/Enterprise Performance Management line of tools, how they are different from traditional sets and how they can be used in conjunction with the traditional Oracle toolset.  But let me give some background first… 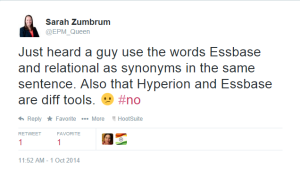 (BTW – The name of this starts with #no as people joked with me after that tweet for using a hash tag for no.  But that was honestly the only word going through my mind at the time.  Thanks, Christian Berg!)

So the above was my actual tweet last week.  I was in a session listening to actual customers talk about their gains with Planning and Budgeting in the cloud (PBCS).  This is a relatively new offering by Oracle and one in which some consulting companies are struggling with how to position themselves in this new market.  Oracle moderated and presented 3 customers that talked about their improved processes.  The first lady was very accurate in her terminology and knew what she was talking about. I wanted to stand up and clap because I was truly excited for her and her understanding of the tool.  The next guy was…challenged (?).  His terminology was off and all over the place.  I tried to listen to his gains and not pay attention to the weaknesses in his understanding of the tools.  Then a question was asked: “Why did you choose Essbase over other tools since you were brand new to the Oracle EPM toolset?”

His response: “Because Essbase is the best relational database out there!” 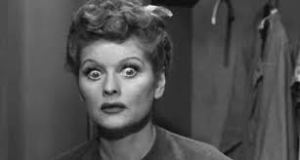 I then looked to the Oracle rep for the polite correction…silence.  My next response?

Then I thought, “Okay.  This is a customer.  Oracle is being nice.”  Then his next slide came up where he was saying that Essbase and Hyperion were different tools. 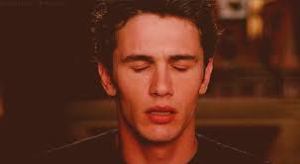 Poor third lady.  I can’t even remember what she said because I was so disappointed with what I had just heard.  But then I thought that I could make this a learning opportunity – what is Hyperion/EPM and what are the basics?

So from this basic layout of what the Hyperion/EPM tools are, you can see that Essbase is not a relational database and that Hyperion is not a different tool than Essbase.

Hopefully this was a good intro into the Hyperion suite of tools!