I have a couple prefaces to my blog post:

I was given the challenge last week of figuring out a way to pull the Start and End Periods for an FDMEE POV and running those values through an automated process for loading data into Essbase. Hmm. Without going into how I finally got into the meat of it, I’m going to show you how to do it. 🙂

Here is a screenshot of my FDMEE script folder:

The first piece you will need is the SQL. The script below should be able to be used in your environment. We included a where clause to trap certain applications, but this is not shown in the example. Note that you will need at least read access to the database tables to get the POV information.

The next piece is the batch script to call the SQL using the SQL*Plus command line. The Oracle client will need to be installed on the server. The script will use the login information provided (note that I temporarily put the SQL password as an environment variable for demo and testing purposes) and the import the PeriodSQL.sql file to run via SQL*Plus.

In FDMEE.bat, you will need to specify the load rule you are using to automate the data loads. We have multiple databases, so I am passing in the application variable from the “big” batch script (_RunAppLoad.bat). This piece will need to be modified accurately for your environment. Note that I’m not using the typical location for sqlplus.exe. Because I was having issues with the script exiting with and running the other scripts, I had to call it directly from the main location rather than a command location.

Here is the “big” script. It’s not BIG, but it runs everything: 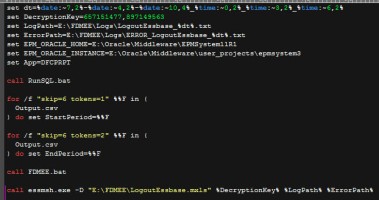 Essbase error file (if errors occurred, they would show here):

Special thanks to Wayne for helping me fine tune my SQL. I was a bit rusty. 🙂