Background: Running Oracle Linux 6.7 as a VM courtesy of VirtualBox. I had some issues with Oracle Linux 7, but all good now!

Here’s the step by step process I took (including my errors) to install OBIEE on my OEL 6.7 box.

1. From the terminal, I yum’ed the following command (sorry, no screenshot) to get the 12cR1 preinstall files installed.
yum install oracle-rdbms-server-12cR1-preinstall
Took just a few seconds and all was good. This will create the user ‘oracle’ and any miscellaneous files/change necessary settings.

2. After downloading the files from eDelivery, I SSH’d them over to my box. They are the files in RED. 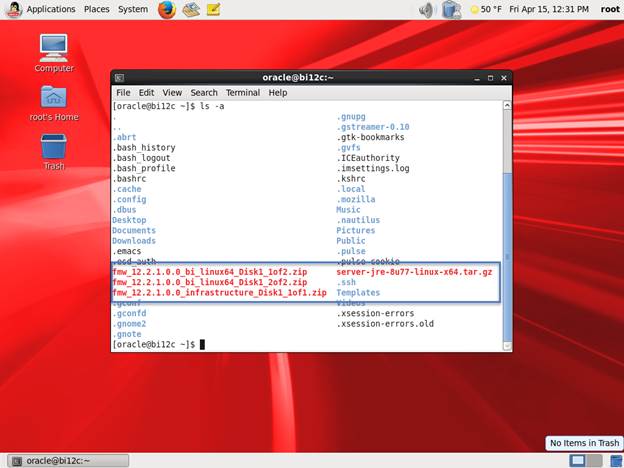 4. I double-checked to make sure java was installed.
Shame on me here…I did NOT pay attention that the Java version was not the same as the JDK I installed! This will rear its head in a bit. But, still, you can verify that you, at least, have Java installed via the ‘java –version’ command. 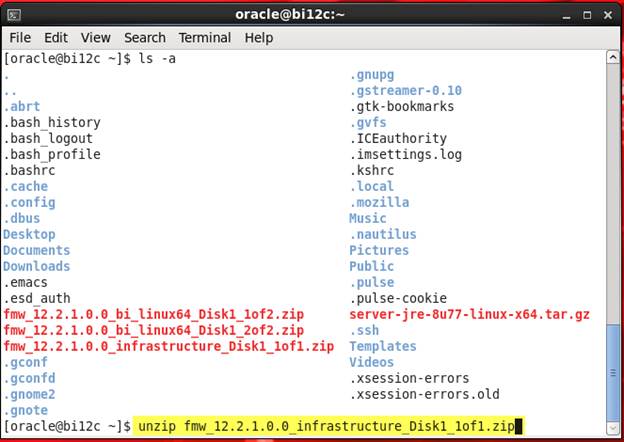 6. I can see that my file was “inflated” (extracted).
However, when I try to use Java to run the .jar file created, I’m thrown an error – The OpenJDK JVM is not supported on this platform. Okay…

7. I went online to download the newest version…which I had already installed via yum earlier. I tried to install it, but it said it was already installed. Okay…
What I realized was that when I called “java” via the command line earlier, it was not referring to the most recent version I just installed.
When I referenced the new one (1.8.0) and it worked perfectly.

8. Odd. I ran it all, but no installation screens came up. Just the command line. Hmmm…
Trying to figure out why no GUI would show, I decided to switch users. I was logged in as root, but running commands as oracle.
I logged in as oracle and ran commands as oracle. Voila!
However, I didn’t learn my ‘java’ lesson the first time and tried to run the .jar file again (in red…bad). When I reran it with the desired java path, all was good and I had GUI installation screens!

10. I made a mistake here…You will notice just before the current command line highlighted, I tried ‘sh’ to run the binary file. Wrong.
When I changed the binary file to be executable (chmod +x), I was able to run (./) the binary file and get the GUI installation screens I was looking for.

Note that this took a few moments to come up…You’ll see the ellipses accumulation before getting from 0 to 100% (in blue below).

12. BONUS! How to change your default ‘java’ location…
In the terminal, type “update-alternatives –display java”. You will get a list of entries, and the first line should show where ‘java’ is pointing to.

By entering “update-alternatives –config java”, we can see the places we can use to call the “correct” java location.

I want to switch it to the last one, number 4.

When I type “update-alternatives–display java” again, it is now pointing to the new correct java. J 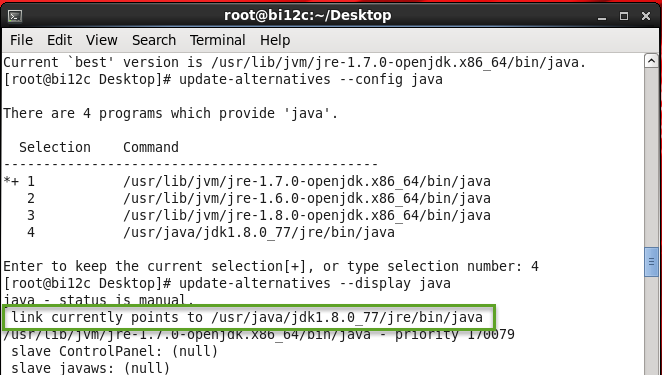